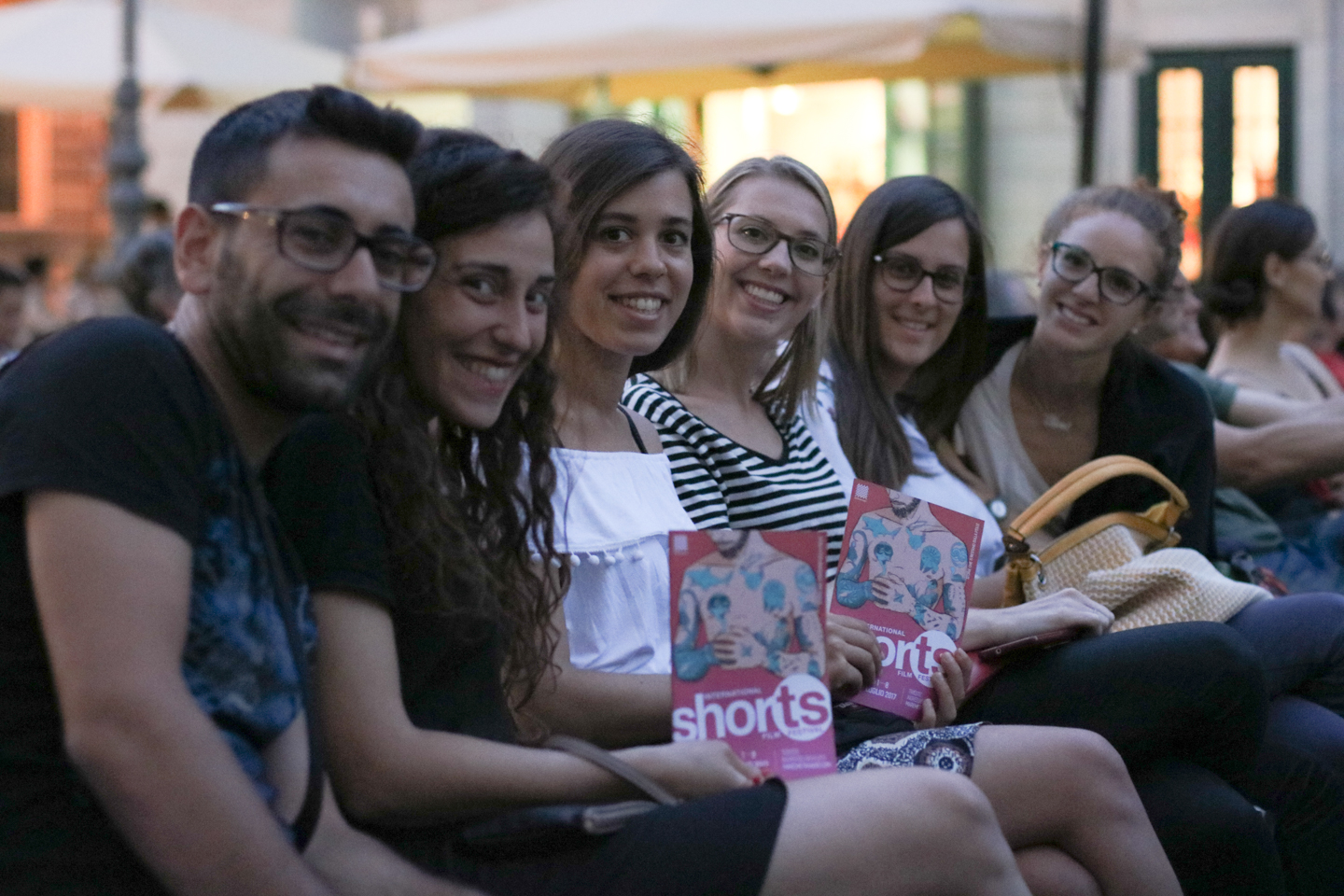 Surges of rain were forecast for Sunday evening, instead this heat is certainly a summertime anomaly, it’s been calm and tranquil, and our group of spectators….dry.

Dynamic and entertaining presentations, alongside the director of the festival Chiara Valenti Omero, who one by one introduces the young yet astute and strapping group of SweeTS4 kids participants.

Here, the images filling the screen are there to be remembered: AN AFTERTHOUGHT by Matteo Bernardini deserves our un-divided attention. It is an original and poetic reflection on the myth of Peter Pan, which when on the cusp of becoming a horror scene, transforms into a fairy tale and existential metaphor.

An old friend and loved one who is not only on our manifestation, but also on the Triestine tout-court artistic scene, is Lorenzo Acquaviva, present this evening…. the doppelganger protagonist of IO E ME STESSO by Diego Cenetiempo. A surreal story, well interpreted and brilliantly directed.

Coming from Germany is a female short film, directed by Katharina Blanken; we are sitting across from a story that needs receptive psychological antennae, to fully understand all of the windows which day and night are populated by various humans. The name of this short film: KAMMERMUSIK – AUDIOVISUELLES GEBÄUDEKLANGPORTRAIT.

I’m truly touched by the thirsty looks of affection, of the little protagonist of SEMELE by Myrsini Aristidou: craving the attention of her father and an almost impossible love, but an incident melts a bit of that perennial ice.

With multi coloured laughter we welcome the amusing greedy chameleon thought up by Tomer Eshed, who with his animated work OUR WONDERFUL NATURE-THE COMMON CHAMELEON puts forth a quaint animal documentary.

Moving on to Massimo Ottoni, and his war-music piece LO STEINWAY; a reflexion on the crudity of war contrasted with a poetic, lively and sensational harmonic antidote.

For the first time misunderstandings between a father and a daughter, remorse and regrets with no way out make up the animated work by Tal Kantor, that avails us of a common virtuosity on an illustrative level.

Every one of us is a protagonist and sometimes victims of our own fate, outlined by a Destiny; the odd protagonists of DECORADO by Alberto Vazquez know something, oscillating in grotesque orbit.

The film THE LONG ISLAND WOLF by Julien Lasseur wouldn’t be displeasing to a maestro of malicious cinema like that of Quentin Tarantino; a seasoned satire of hard-boiled narrative, conquering the approval of the public.

While an extremely pleasant breeze washes over Piazza Verdi, we now contemplate URBAN AUDIO SPECTRUM by Marina Schnider, new from an original hand and unusual in its use of the language of audiovisual materials and sounds.

The undisputedly charismatic pestiferous old ladies who are full of late-erotic rapture created by  Brianne Nord Stewart for  BEAT AROUND THE BUSH, a costume satire on the rite of sexuality or the over 70’s.

We all know how difficult it is to swim through the tempestuous waters of adolescence and youth, it seems that everyone has already been told, however this is about an endless journey; Valeria Sochyvets knows something that with KROV, takes on an original form.

How much less heterogeneous is the human race invented by Hasan Can Dağlı for his SIYAH ÇEMBER taking faith from the old motto from Sir Arthur Conan Doyle: mystery is the key to translating reality into literature.

The big screen projections cease with the three minute long HATCHET by Jim Powers, where a snowy path forms the background of a not quite thrilling event.

Our attention is drawn to the beautiful periwinkle purple dress of a young spectator, and with this tripod of colour and vision we set the date for Monday evening.

L’armata degli scarti viventi: all the creatures on video!
Scroll to top