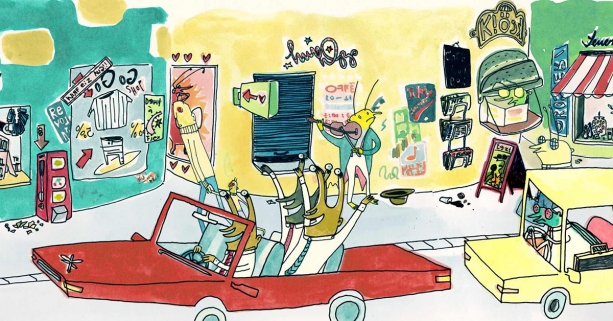 Martian Chronicles is a great novel by Ray Bradbury which puts forward the possibility of aliens and humans living together in peace, in a sugar-sweet context where hugs and mutual understanding are deep-rooted values.

This year we’re all a bit extra-terrestrial, like the human occupants of an electronic wood which we’re learning to cultivate.

An afternoon masterclass dedicated to a very ambitious young man with already several successes under his belt – Saverio Costanzo, always a pleasure to listen to.

The Maremetraggio section is always full of surprises and reveals various parallel universes to us once we’re connected.

Starting with WHY SLUGS HAVE NO LEGS directed by Aline Hochli, an enjoyable animation short centred on the adventures of a group of slugs. On the one hand the professional trials of those not known for their fast pace, and on the other a tale intended for a young audience, a double and highly convincing narrative outcome.

The next work, by Rosario Capozzolo, is Italian – IL PRIMO GIORNO DI SCUOLA DI MATILDE. A father who appears to be suffering from mysterious remorse and anxiety assails his daughter with disproportionate advice in front of the school gates. The finale is dramatic and emotional.

Instead from Singapore we have a rough outline of childhood in ADAM directed by Shoki Lin. Once again a story of alienation, abandon and in this case with a tin of powdered milk guiding the narrative.

MONOLOGUE by the duo Landi, Mellony takes a stand on the issue of hearing impairment and illustrates to us how hearing imbalances can upset the lives of any individual.

Director Luca Zuberbühler presents us his EXIST, structured as a sophisticated theatrical metaphor of life and death. The death of a young workman may be a misadventure involving ghosts and among the ruins of a crumbling stage a story filled with pathos unfurls.

A COLLOQUIO CON ROSSELLA by a dear old friend of our festival, Andrea Andolina, features the voice of Ariella Reggio and well-known actors such as Sara Cechet Woodcock and Raffaele Sincovich.

A woman’s life told from an unusual perspective – her answering machine messages.

The latest news churned out by news reports is always marked by a now chronic pessimism, so that when images appear on the screen of some wonderful films scored by Ennio Morricone such as Mission or Once Upon A Time in the West we realise even to a greater extent how brighter emotional moments and positive thinking can only come from an enlightened artistic partnership.

A wonderful song by Bruce Spingsteen goes by the name of Girls in Their Summer Clothes. This too in our opinion is a major indication of renewal, given all the beauties from Trieste and elsewhere who bring colour to the streets and squares.

The date is for Friday evening.