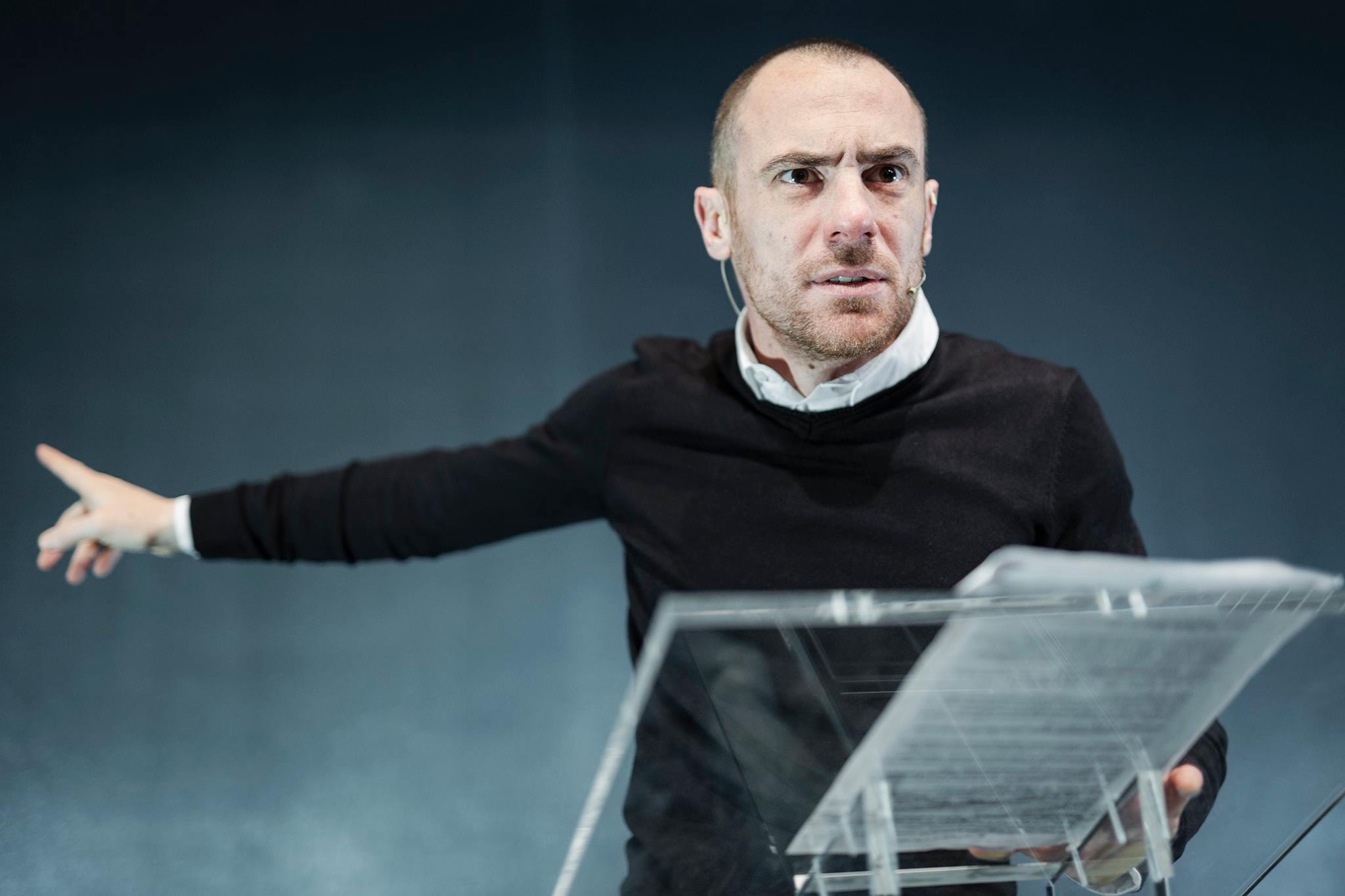 When looking up the definition of “theatre” in a dictionary, the second meaning, after that relating to the building, is of a performance before a live audience, often with audience participation. A definition which necessarily refers to the main attribute of theatre performances, that of being a live show, a unique one-off each time. Until a very short time ago there was definitely no medium capable of recording and crystallising the uniqueness of a performance.

No type of filming has ever been able to reproduce the sensation of being in that theatre to watch that specific performance. So, therefore, the idea forming the basis of the VR version of Segnale d’allarme is absolutely pivotal. Virtual reality is possibly the first and only way of succeeding in crystallising a theatre performance forever, to restore to audiences the sensation of sitting in the front row, feeling the energy of the live show, of being close up to the performance by Elio Germano and the play’s crescendo. No spoilers, but if we then think of the arrival point of Segnale d’allarme, we inevitably find the virtual reality interface the only way possible of enjoying the monologue.

The play by Elio Germano and Chiara Lagani has become a virtual reality film directed by Elio Germano and Omar Rashid. Segnale d’allarme is the transposition into virtual reality of La mia battaglia, a work staged by Elio Germano himself which speaks to and about our era. The audience will be guided, step by step, in mixing up the real with the imaginary. Within this perspective the possibility offered by virtual reality for entering into the narration appears perfectly appropriate. Thanks to and through VR the audience will be immersed in the play, become a part of it. Audience members will be in the theatre, in the front row, with the others. They will feel the energy of the room around them and will seek out the expression and even the gestures of the person sitting next to them. They will listen to a monologue which will be a crescendo and, at the same time, a falling-off towards the grotesque.

Elio Germano (Rome, 25 September 1980) is an Italian actor and theatre director. During his career he has won, among the other awards, three David di Donatello for best leading actor for Mio fratello è figlio unico, La nostra vita and Il giovane favoloso. For La nostra vita he also won the Nastro d’Argento for best leading actor and the Prix d’interprétation masculine at the Cannes Festival in 2010. In 2020 he received the Silver Bear for best actor at the Berlinale for his portrayal of painter Antonio Ligabue in the film Volevo nascondermi.

Art director, producer and designer, Omar completed his studies at Florence Polimoda in 2002. After gaining experience as a fashion designer working between Paris and New York, he created his streetwear collection, which he promoted via non-conventional channels. His passion for new languages and their applications has become the core of his profession. In 2013 he made Gold AR, a virtual reality app that won the Auggie Award for Best VR Marketing Campaign. In 2016, in collaboration with Elio Germano, he made NoBorders VR, the first Italian documentary to use virtual reality and winner of the Mibact (Ministry for Cultural Heritage and Activities and Tourism) MigArti prize at the Venice Film Festival.

A corta distanza
Scroll to top