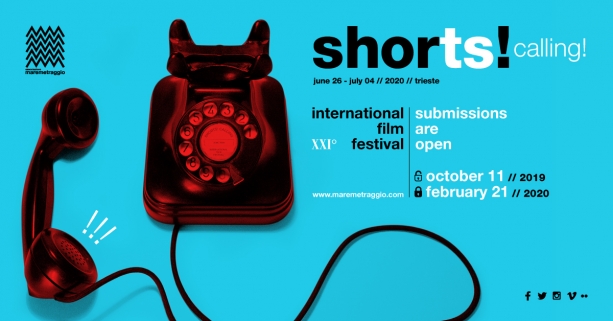 The submissions for the 21st edition of ShortTS International Film Festival are now open. The festival, organized by the Maremetraggio Association, will be in Trieste from 26th June to 4th July 2020.

This year’s edition features “Science&Society”, a new competitive section dedicated to short movies from all over the world, with a 3.000,00 euro prize for the best movie. The section is created in collaboration with ESOF 2020 (EuroScience Open Forum), the most important European event focused on the debate between science, technology, society and politics, which will be held in Trieste from 5th to 9th July 2020. The sections Maremetraggio, Shorter Kids’n’Teens and ShorTS Virtual Reality are also confirmed. In this edition, the program will also feature the section Last Chance, including short films which did not win any award. Submitted films must not exceed 10 minutes (titles included), must have been produced after January 2019 and can belong to any genre. A maximum of 10 selected films will be included in the Maremetraggio section.

The well-known competitive section Maremetraggio is reserved to short films which have already been awarded in one or more international film festivals in 2019. The 5.000,00 euro prize for the “Best Short Film Award” has been confirmed.

The section Shorter Kids’n’Teens accepts every genre of short films dedicated to the youngest. Just like last year, the section will be divided into two age groups, with two different juries: the Kids section, dedicated to short films for children aged 6 to 10 years old, and the Teens section for teenagers from 11 to 15. As in the previous editions, the children will be the jurors and will choose the best films.

This year’s program will include again the international section ShorTS Virtual Reality, completely dedicated to short films in virtual reality. This is due to the VR Room’s success last year in the foyer of Verdi Theatre, where the traditional movie theatre dynamics were recreated using 15 stations for the collective vision of the competing films. The 2.000,00 euro prize for the “Best Virtual Reality Short” has been confirmed.

In order to submit their films, all participants must use one of the following platforms: Festhome or Filmfreeway.

The deadline for submission is 29th February 2020.