You are here: Home1 / Association Activities 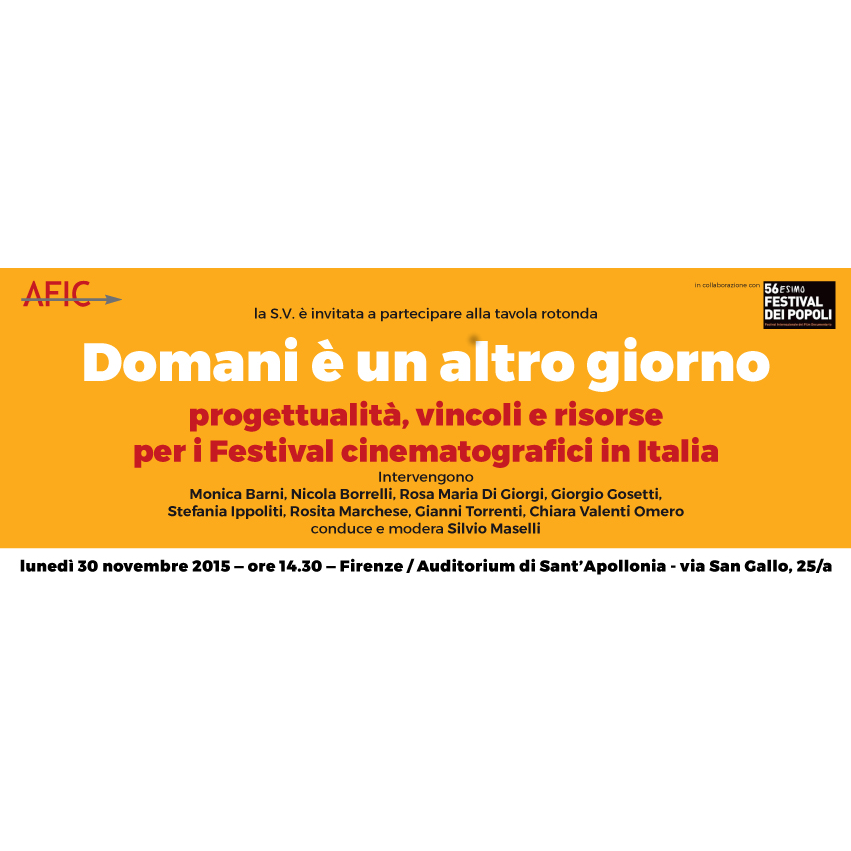 Round Table on the projects, on the constraints and the resources for Film Festivals in Italy

By now Film Festivals represent a true cinematic circuit that loosens throughout the years and in places all over Italy. It is important to maintain a platform which is the principle mode of cinematic promotion in Italy. Festivals, like all other cultural manifestations, especially in this time of economic crisis, look to maintain it by their own means and with the support of the private sector. However, it is without doubt that to generate this type of cultural economy it is necessary to have support from the State and from local entities.

But by which criteria, with which decisions and by which means?

With a look into the near future, the round table ‘Domani è un altro Giorno’  [part of the 56th season of the festival dei Popoli in Florence from 27th November to 4th December] will look at the new guidelines of the general direction for cinema by the Minister for Cultural Goods and Activities, directed by, Nicola Borrelli. It will anticipate the content on the presence of the members of the Ministeral Commission. Not forgetting the role of the regions- with the presence of the assessor for the culture of the Friuli Venezia Giulia region, Gianni Torrenti, and of their Film Commission (he will interview the president of the Italian Film Commission, Stefania Ippoliti) and the importance of private provisions.

The festival system is not an alternative to that of traditional cinema, because it is often put into the same category of business and broadens the function of the promotion of the cinema. Overall it will be important to listen to the ideas of Senator Rosa Maria di Giorgi, first person to sign off on the ddl on the reorganization of the cinematic and audiovisual system.

The Italian Cinema Festival Association proposes therefore not only to analyze the true state of the public financial lines but also to propose certain projectuality and transparence for the future, drawing attention to the winners and to the resources available today, with one hopeful look to tomorrow. Which is another day.

New collaboration for the festival Maremetraggio, that is part of the calendar of Vicino Lontano, an event its IX edition, that this year will focus on the issues of the global economic crisis and the Italian situation and will analyze those that are the perspectives of Europe and the new digital age. Scheduled, from the 8 to May 12, 67 appointments, including a taste of four short films “to theme” among those already proposed by the International Short Film Festival and the Debut Works.
END_OF_DOCUMENT_TOKEN_TO_BE_REPLACED

It opens Thursday April 18th 2013 “ The good job rewards (advertising, beauty…)” in Trieste at the Veruda Hall of the Palazzo Costanzi. END_OF_DOCUMENT_TOKEN_TO_BE_REPLACED

After the Triveneto and the Friuli Venezia Giulia, from Pordenone to Gorizia, “Short on tour- At the cinema as once” finally makes a stop in Trieste.
END_OF_DOCUMENT_TOKEN_TO_BE_REPLACED