Blog - Latest News
You are here: Home1 / Association Activities2 / The good job rewards (it is the publicity, beauty…)

It opens Thursday April 18th 2013 “ The good job rewards (advertising, beauty…)” in Trieste at the Veruda Hall of the Palazzo Costanzi.
The exhibition exposes the best works of the students participants to the creative contest DAI-AVRAI, oriented to the students of the course of art direction, provided in Master of Science in Public Communication, of Enterprise and Advertising of the ex Faculty of Sciences of the Formation, now Department of Humanistic Studies of the University of Trieste, placed side by side with professional materials of
ADCI 2012- “ L’austerità creativa nella comunicazione di oggi” – introduced on 25th March 2013 at Palazzina Liberty, in Milan. What should have been the 2013 Annual Art Directors Club – generally a collect of prizes and recognitions reserved to exclusive professional use – this year becomes the occasion to reflect on the value ( and the necessary appointment) of the advertising to retrain it as motor of the economy and the society –
and of ADC* E – “Best of European Design and Advertising” which brings together 15 Art Directors Club of Europe, with the primary goal of improving the standard of creativity in the field of communications and disciplines related to it.

An awareness campaign promoted in this edition by the Humanistic Department (ex Faculty of Sciences of the Formation) of the University of Trieste, by ADCI – Italian Art Directors Club, by the Association Onlus
“ Goffredo de Banfield” and with the participation of Maremetraggio, festival of the short film and the debut work. Realized in collaboration and the support of the Commune of Trieste in range of the amplest project “Violence against Women and Media” in which sees Fabiana Martini, engaged on several fronts, face and talk about the way in which these issues are dealt and how that affects the way to think of the public opinion (Il Piccolo – 25th November 2012).

Has departed so IDEE CONTRO, with the connection to articles and titles on the subject, as for instance “Violence against women, only a title and so on”…The title “violence against women”, has become a mantra. It repeats in centuries. And there is always some “female pen” called to comment. Then the new victims, in bunches of two or three, always young people, are buried and set aside”… of Lidia Ravera from Il fatto quotidiano – January, 8th 2012. This effective title, these words that well they transmit the terrible reality are the engine that has inspired “IDEE CONTRO LA VIOLENZA ALLE DONNE, Titles and films between reality and imagination to give voice to the silence” a proposal for communication campaign that looks in its own way to face and to overcome certain consolidated stereotypes, looking at the issue of violence of different angles. The idea develops exactly on the interlacement of news and films titles, with the purpose to give voice to the silence of the women on different forms of suffered violence, (physics, social, psychological) therefore not only to sensitize to the tragic theme but with the perspective to launch a purposeful message. The project is structured on several levels. Each elaborate, takes the cue form from titles of chronicle news by now unfortunately daily. And is freely inspired to titles of famous films, triggering so from time to time, a game of references. It is projected in fact as a poster with the card of a film, devoted to an onlus association for affinity, so that to create a gallery of symbolic images, using a known language, to stimulate and to provoke a reflection in the public.
To promote the thematic of this edition, analyzing it in its manifold aspects, the participants have planned ideas working in couple as art director and copywriter. The elaborate finalists will be shortly evaluated, in Milan from the jury of ADCI Art Italian Directors Club under the professional profile, and in Trieste, as usual, from the Department of humanistic Studies (ex Faculty of Sciences of the Formation) of the University of Trieste and from the Onlus association “Goffredo de Banfied”, under the design aspects and of social impact.
It is planned also this year’s vote from the public, invited to give its preference online (with only one vote per e-mail) to [email protected], from April 18 to May 3.

The award ceremony will be held Tuesday 7th May in Aula Magna of the headquarters in via Tigor 22, at 11.00 am. 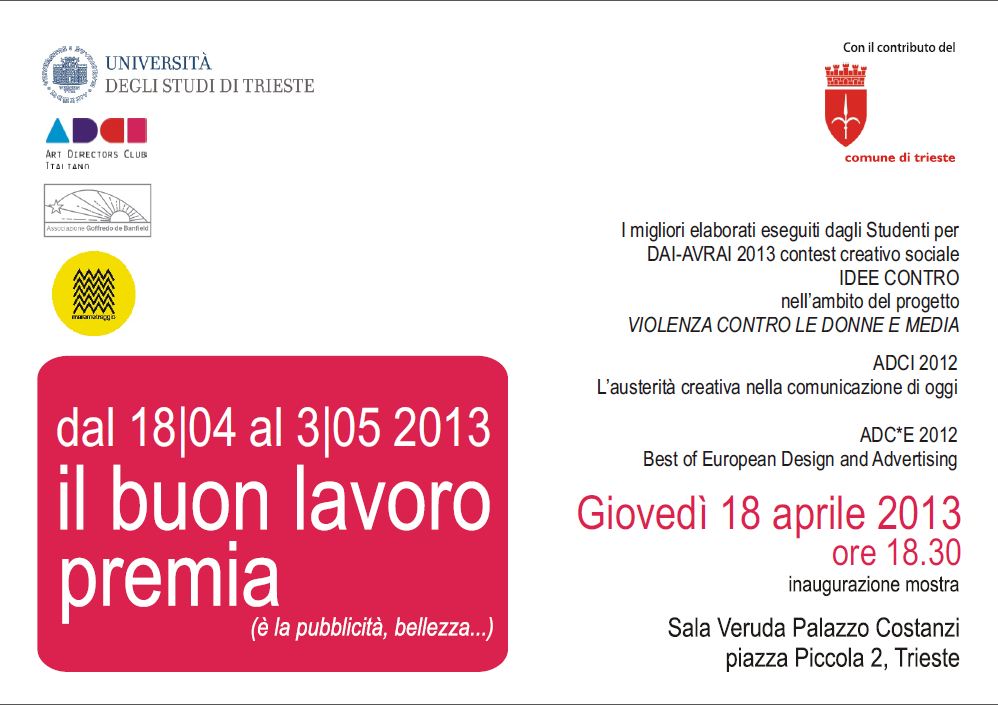