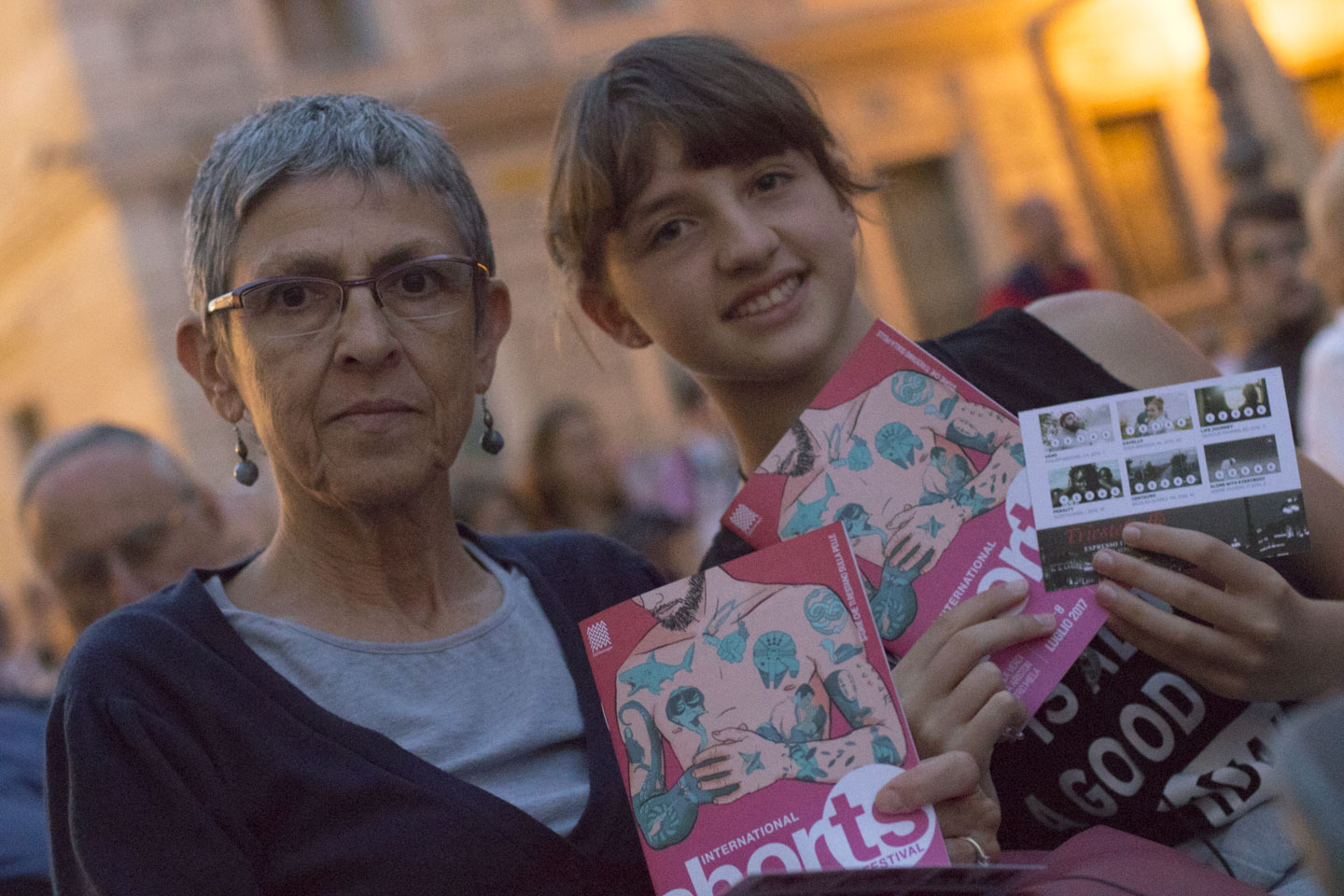 18 flickering candles perched on the top of the birthday cake for the SHORTS INTERNATIONAL FILM FESTIVAL!

We’re getting into our old age and proud of it; a pride brought on by the responsibility of always being present where great images, talent, ideas and projects in the form of visual seduction are produced.

Press conference in the suggestive Bobi Bazen room of the Palazzo Gopevich, watch out ladies in your stilettos, because the hard wood floors are smelling of fresh wax.

A windy evening in Piazza Verdi Saturday evening, here, unexpected yet pleasantly surprising, is the first event of the exhibition; LE SVENTURE DEL SIG. MO-KI-TO’ not using the language of film, but instead a refined evolution of dance and works of the Devenir Theatre Company.

The ballet dancer and artist Gustavo Vallejos is simply wonderful as directed by Jorge Demarco, the public certainly approve, astonished.

The presentations see the organizers of the festival talking away happily, and after receiving a big hand from the public they give way to the numerous projections of the evening.

What colour are the sands of Senegal? In which instance do we admit to heaven, real and metaphorical? And above all; how much do we really know about these colourful characters, young and old, who run ahead of us?

SAMEDI CINEMA by Mamadou Dia is not just a story of two youngsters, but it gives us a view of a life that we still know very little about.

The art of Tersicore brings with it joy, pain, character contractions that are probably ignited by those who have never experimented with the gruelling world of dance; onto the screen comes an unlucky young dancer in SUSPENDU by Elie Grappe, Swiss film-maker who presents a work rich in the spirit of Old Europe.

The taste of a Surrealist painting and only apparently cold (we’re thinking of an evocative film-maker like Granger) seems to have inspired the Hagage- Gomez pair, in their short BELOW 0° they tell us the story of an Antarctic landscape, which is not forgiving when working using the methodology of animated cinema.

On a completely different psychological level comes THE OTHER SIDE OF DOOMAN RIVER by Sewoong Bae; a muddy report on the drama of an attempt to escape from North Korea in an attempt to reach a bank even further away.

The tasteful satire on modern means of communication created by Davis M. Lorenz is #SELFIE from the series: how to ruin a vacation in Berlin. The short demonstrates that the most evanescent timing has the ability to cause irreparable damage within the shell of a familiar ménage.

The two young protagonists are punctual and sympathetic.

A little yet great artistic prodigy comes to us in the form of Boris Seewald with DISCO: a staggering amount of paper drawings brought to life with a spiral of choreography which is never fragmented or un-fluid.

While some curious tourists comment on the images that they are presented in an incomprehensible language, here breaking out onto the screen is PARENT, TEACHER by Roman Tchjen; in a scholastic contest, between the spires of such thrilling film material. The dialogue between a father and a young teacher introduces us to that ever ignited theme of child and adult violence.

Scandinavia, the land of lakes and luscious vegetation: what better context in which to set the sweet story of the singing fisherman of VAND by Philipp Andonie; watch out though because macabre humour is lurking!

Also good, in fact fantastic cinema, is the story of teenage love thought up by the Hollandese film-maker Sven Bresser with his CAVELLO: here we are taken into a private and psychological context coming to a final and unexpected evolution of events.

Following this is LIFE JOURNEY by Sajedur Rahman, another chance for an existential metaphor for things that affect all or most of us.

The dramatic football match played by the protagonists of PENALTY from Aldo Luliano takes us into a nightmare of death and violence, while harsh photography illuminates the martyrs- dummies are choked by their own vortexes.

The world map of SHORTS INTERNATIONAL FILM FESTIVAL takes its leave on Saturday evening with two minutes of ALONE WITH EVERYBODY by Andrè Viuvens; which is completely based on the homonymous poem by Charles Bukowski, incredibly recounted in such a small yet imaginative space.

We are faced with important images that close a remarkable evening of cinema and screenplays amongst a human sea on a starry Triestine night, giving it an element of colour and added flavour.

The young spectators next to us smile contentedly, and a smile is always the best form of approval for these art-forms. We’ll see you on Sunday evening!