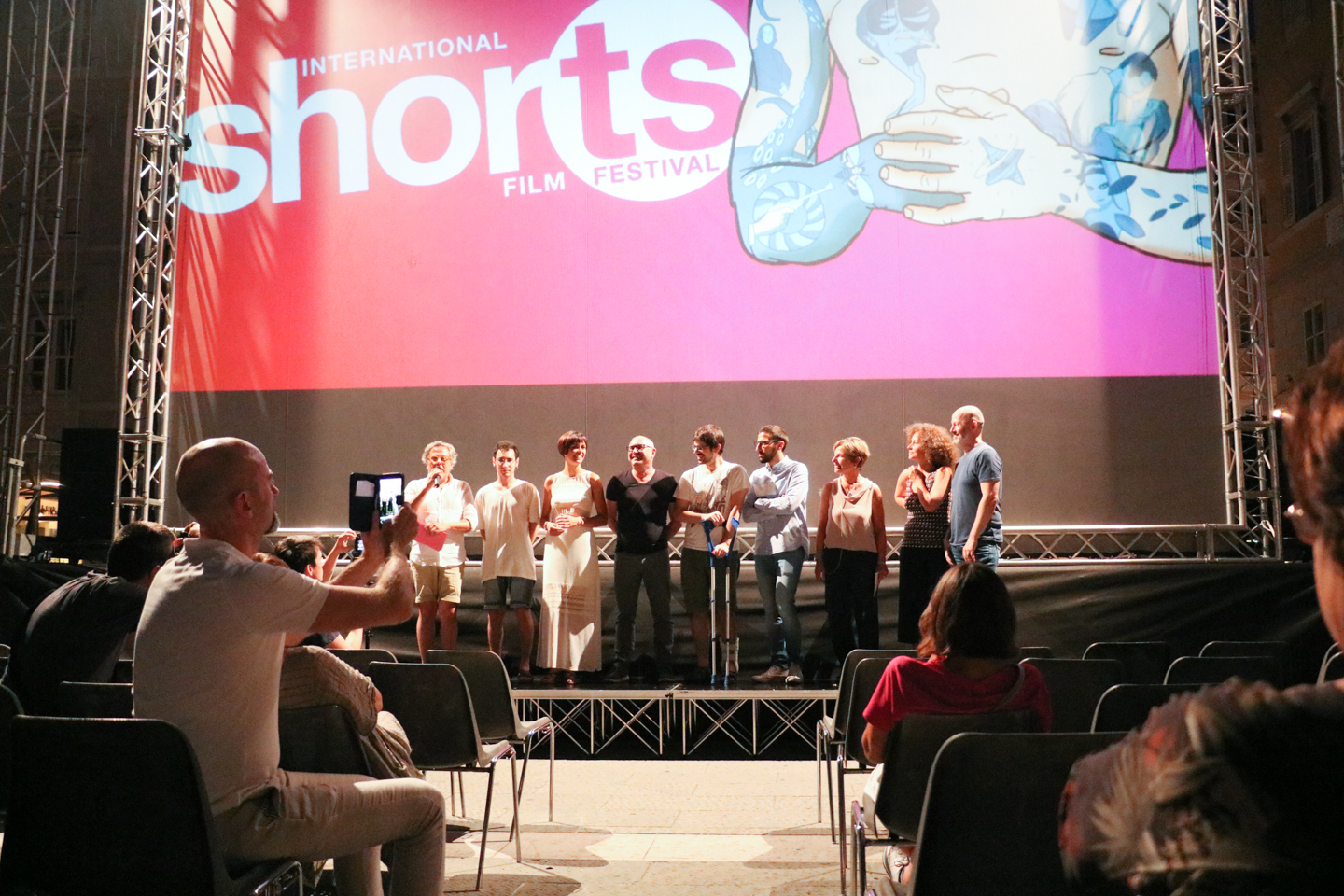 When a festival finds its way onto your busy schedule, the risk is missing something, very often little luminous stars which we then regret not to have let shine. The outdoor temperature is deadly, there isn’t even that sweet breeze from the sea to save us from this attack of heat.

An afternoon dedicated to an in depth analysis in these times of intrinsic un-attention.

The panel, UNA BUONA DOSE DI FOLLIA (CINEMA E ALTRI RIMEDI), on the stage of the Teatro Miela is full circle of speakers coordinated by the notable journalist Rula Jebreal; a touching occasion of reflection and confrontation making us proud of the film L’ACCADEMIA DELLA FOLLIA by Anush Hamzehian, a non-banal vision that would be great when extended to as many viewers as possible.

Over here signs of rain have chosen the worst moment to pierce through the heat and phosphorescent elixir, but the artistic helm stays strong and steady in the hands of the organizers, and so we have Cinema!

After the usual greeting and vote of thanks, the projections take place in Piazza Verdi, despite the many coloured umbrellas.

Friendships between men and animals from those who used to admire naturalistic pioneers such as Jack London.. AKITA by the British Cummings and Hickman duo is short with some surprises, from surreal tastes, marked by a largely realistic press photograph.

So here we are to contemplate a gallery of characters requiring the work of an optician; in the suggestive animation SORE EYES FOR INFINITY by Elli Vuorinen captures, with sympathetic imagination, the attention of the little ones in the crowd, notably the most important judges.

What goes on behind our backs? For endless seconds the screen presents a green and motionless flatland, but a moment on and an interminable army of refugees and migrants emerge into our presence….

Succeeded by the beautiful and significant short Slovenian film MEJE by Damjan Kozole.

We don’t merely learn about discoveries of visually nominal platforms from the Discovery Channel, especially on the theme of animals; LOVE by Rèka Bucsi is a curious and entertaining split animation where lots of little phosphorescent eyed animals and funny crows tell us about their feelings.

I see Naples and I see death, said the poet, and this city is certainly an infinite resource, especially when it comes to that strange intrinsic mysticism of superstition that is only a drink consumable in the Vomero or Bettole valleys, just a stone’s throw away from the sea.

PARUSIA NAPOLETANA by Rosa Maietta is a feminine view on superstition, and those ‘sopra maradona’ effigies reminding us of an exultant season of times past.

Something ancestral exists, like a strange pagan and peasant celebration, between the dark images of the film ASCENSÃO by Pedro Peralta: in their raw pride they present something of the best cinema of Buñuel.

With the easiest fruition comes the animated remake of Little Red Riding Hood, by Ario Aaffarzadegan, an anti-conformist hand to interpret a universally popular fable.

There isn’t always the need to have a flesh and bone character to create a story, as proved by the film maker Mir Ezwan with his short film RM10.

In this case wandering through what is most likely an oriental metropolis, glittering with nocturnal signs, is nothing less than a bank note; this indispensable object of daily life begins its journey with a woman paying for food, next ending up in the hands of a mother and her child, and under the constant neon lights of a wasteful civilization, eventually returns to its original detainer.

Can one laugh in the face of old age, or at least propose a less conventional reading of it?

COLOMBI by our very own Luca Ferri doesn’t refer to well known simpletons but to a couple of old spouses who show us good deeds, glories, resignations and illness.

Articulated by a female narrative voice, is the 20 minute long story which in black and white, recalls the provocations of the Ciprì and Maresco couple in certain brutal instances.

The Italian writer instead puts his camera between prison bars, to tell the story of painful solitude and waiting that quietly renounces speech, his message is clear and unequivocal.

Applause erupts from the heart of the crowd.

From a marionette style yet un-dusted world comes the little protagonist of the short Slovenian film SLOVO by Leon Vidmar.

There is also a nice grandfather, reminiscent of Geppetto from Pinocchio, and a little allegorical event of Ithacan and Aquatic humour.

An intoxicating conclusion, like drinking a Mohito – one with well chopped leaves- comes the feline circus act in METUBE2- AUGUST SINGS CARMINA BURANA by Daniel Moshel, that transports an entire European piazza to a high-tech disco…. Simply priceless.

As our great little responsible of SWEET 4 KIDS Tommaso Gregori leaves for Boston (Bon Voyage!), our English intern Victoria Ellison watches the screen and is a discrete and sweet presence.

They are two great friends of our festival, who we will without doubt enumerate in the next and final Board Diary.

See you on Saturday at the Castello di San Giusto, for the long awaited award ceremony.

ShorTS 2017 All the winners
Scroll to top