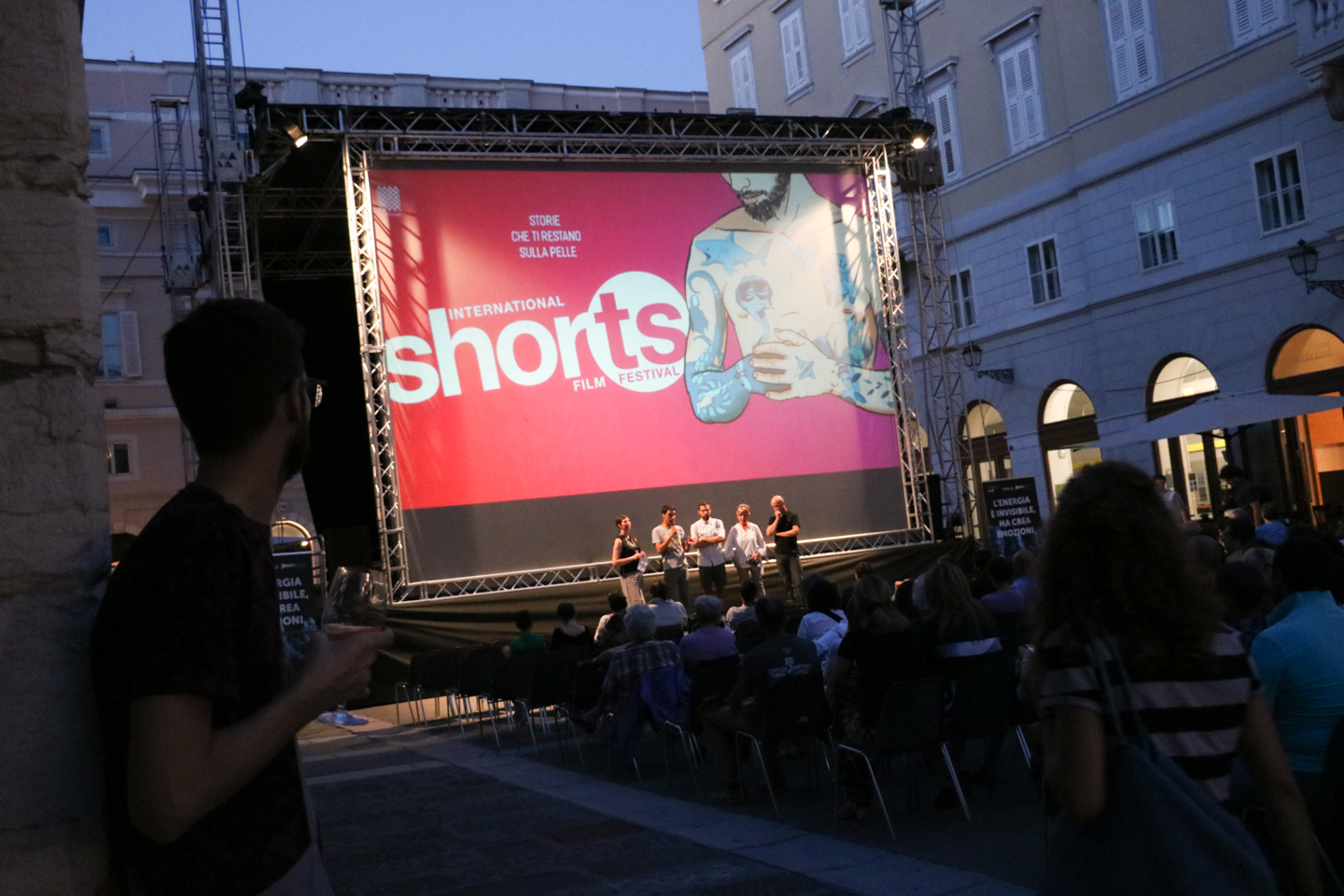 A fiery red sunset on the Triestine horizon, a spectacle which is hard to forget; a poetic and magical yolk, while the magic of cinema is on display just a few steps away.

Piazza Verdi, crawling with people is nectar for the eyes, warming the hearts and the morale of the organizers of the event, who live through the emotions, palpitations, visual surprises, but who at the same time put in immense work and total dedication.

Italian images, in the opening for the MESTIERI DEL CINEMA event which presents SEPARATI, product of a collective, intelligent and ironic work, that doesn’t just talk about conjugal failures.

Amongst the performers is Lorenzo Acquaviva, along with other young harmonic talents.

The first short of the evening, ALIVE AND KICKING: THE SOCCER GRANNIES OF SOUTH AFRICA, should be in our opinion, projected in every school in the world. We are in fact talking about a docu-film about the incredible physical and moral resources of the old ladies of Limpopo, Africa, causing us to reflect on our identity and our rights and duties.

Mare nostrum, as the Romans would have said, and through the aquatic currents of sea water we unravel the animated creation of Marles Van Der Wel with ZEEZUCHT.

As always as part of his narrative, the writer creates empathy by involving us in his little illustrated world.

Mysticism, transcendence, interior worlds that look like they’re made of steel but instead turn out to be blown glass.

THE SAD MONK by Diana Francovic takes the viewer into the world of a young religious man, tormented by his doubts, constantly in a battle between his faith and prosaic and pagan worldly temptations. Scintillating images, and a very topical issue.

We disentangle in a night time setting the dramatic creation of PATH by MD Abid Mallick, where a story of BRUTAL terrorism is narrated like a macabre constellation.

Stopping at just one, repenting minute of narration to point the finger at something that comes from the heart, overwhelming, perpetrated injustice; in this case they are animals when it comes to money, silent testimonies on human stupidity. This can all be seen in DUNYANIN OLUMU by Evrim Inci, and are still winning images.

The Italian director Dario Imbrogno chooses OSSA as his short film, refined and evocative, mirror games, one minute a horror and the next dull – romantic, and an amalgamation of very interesting animation.

Cinema, craving a muse… how much fatigue and how many assorted sequences must one go through before he can put his stamp on a work of art…. choosing the work of the amateur film maker, Johannes Bachmann who recounts many of these things in his short, DIE KUNST, MEINE FAMILIE UND ICH.

Extremely tormenting, like a black lake where you can’t find the shore, the winning narrative of Dario Samuele Leone in QUELLO CHE NON SI VEDE about work and self-denial, we can also count on a meta theatrical interpretation on the part of the protagonist.

THE OFFER by Winnfred Jong instead looks at an original encyclopaedia seller taking us into a domestic environment, and much like in the memorable theatrical text IL VISITATORE by Eric Emmannuel Schmitt, there could be a metaphysical surprise lurking behind the door….

P AINT by our very own Antonio Lusci is an aggressive labyrinth twisting and turning on the theme of artistic inspiration, on the neurosis and the polychrome tensions to which art can be subject.

The story by the film-maker Jaume Quiles takes place in cold immobility. With PARADIS he exploits one of his peculiar illustrative fantasies.

Concluding with the teaching of great cinema in the spectacular LA VOCE by David Uloth, which is about music and vocal and phonetic transformations, in a story line by Howard Philips LoveCraft….

After a hypnotic journey, it is now midnight, the hour of witches and fantastical happenings!

See you on Wednesday evening.