The above theory is fully supported by these evenings full of moments connected to the world of the youth, moments on which we will reflect in the next logbooks.

A super crowded venue this Sunday evening, which doesn’t loosen the grip that the heat has: evidently love for film is an excellent antidote to the oppressive weather. 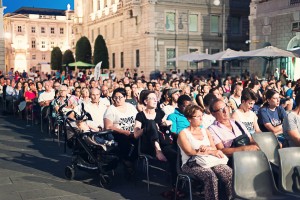 Without further ado, we prepare ourselves for a rich evening full of screenings, from all over the world;

A savage fight between two boys almost turns to tragedy when one of them ends up in a coma because of the blows suffered, in some way the arrogance of the ‘green years’ is put into the past and the we see the first glimpse of adult awareness. The work of Wess Pelinenburg entitled COWBOYS JANKEN OOK.

What would you think, citizens of our crazy world, is there existed a society where those who did not earn anything were “demolished” through a sort of sponsored euthanasia?

FIRME USTED AQUI by Rodrigo Zarza Rioja introduces us to a grotesque place where someone is already promoting such a project.

Friendship, love, so many confusions generate human relationships, when there you want to keep grudges and vulgarities…HJONABANDSSAELA by Jorundur Ragnarsson features two elderly bachelors struggling with a female compagnion and themselves, with their unresolved doubts had since they were little.

Forward again with JOSE’ directed by Alexandre Bouchet, that once again illustrates the best and worst of the male character, and does that all the way keeping his own personal style.

Stupendous, then, the animated parable of a girl that yearns to change identity, to go from human to animal, adopted and beloved by a pack of coyotes.

Based on a true story, on what happened to a telegraphist in 1944, the compact short film THE WEATHER REPORT by Paul Murphy, that only on the end credits is written that the protagonist was the reason for the postponing of the Normandy landings.

War, a threat that infests our reality and our dreams, comes again in the two minutes of MELODY NIGHT directed by Kayhan Anwar, a very refined cartoon.

FUMER TUE arrived from France, created by Denise Powers and ironised that which we Italians would call the vice of the “chat up”, in a verbal twist which was very pleasing.

Continual tension was palpable in the sequence of events of SKINSHIP by Nichola Wong, which demanded attention: here speaking of sexuality and human relations, things that concern everyone.

Senile dementia, the illness and the invalidity are themes which make the heart shake, not to be taken lightly, like in PFLEGESTUFE by the German director Julia Peters, a terrible recount of distruction and threating morals.

If behind the video camera there is a woman, and it has been said many times, very often we can count on ecsquisite and innovative directive and character points of view, like in Mirna Dizdarevc’s ISKUPLIENJE.

And we are on the homestetch, whilst a timely breeze cut throught the red sky, rolled the images of DOMOJ by Simona Feldman, follwed by TOBACCO BURN by Justin Liberman, where screeplay and actors provided their effective contribution to a narrative of violence, no other definition being apt.

Do you have your fan ready? For now, everyone to bed, but we will start again Monday evening.