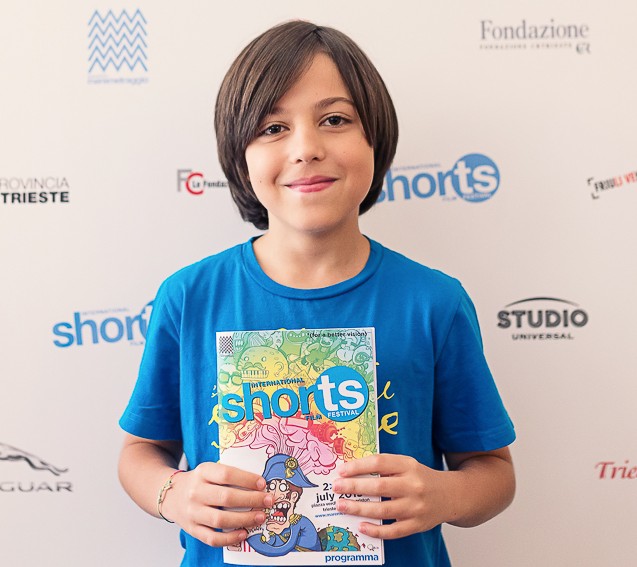 “And you will hear a voice, a voice behind you. That voice that tells you: You will never be this young again…” DAPHNE DU MAURIER, I’LL NEVER BE YOUNG AGAIN.

And Daphne Du Maurier was right to underline the preciousness of the most innocent part of life, when utopian dreams and reality chase eachother in a flamboyant waltz.

This year of ShorTS International Film Festival can count of the present of a very special artistic director: Tommaso, only ten years old and already enviable cinematic competence.

Exceedling pleasant, polite and spontaneous, he curated the selection of short films for the SWEETS4KIDS section.

A new initiative for the festival which allows even our smallest residents their say on film.

Someone suspects that Tommaso, in a different guise, would have already published eight books and participated in at least fifteen symposiums on the latest tendances of Inuit film and Russian formalists.

We’re joking obviously, but if a good beginning bodes well…

We won’t bore you anymore with weather complaints, we’ve arrived now at a point of no return.

An evening of good, even great film, in Piazza Verdi with an Italian work, L’IMPRESA by Davide Labanti about losing work, battles too important to keep quiet about, dignity, everything that unfortunately is a part of our everyday lives.

Great work by the actors, in the roles of old and young forced to exacerbated reactions. like in LA CLASSE OPERAIA VA IN PARADISO by Elio Petri, master piece of 1971

Have you ever seen that terrifying Dutch film about a murderous life, L’ASCENSORE (THE LIFT by Dick Maas, 1983)?

There the plot was metaphysical, in the short film featured this evening LA NOCHE DEL ASCENSOR we are on different ground, but it isn’t lacking fear, guaranteed by director Antonio Such.

Locked in an out-of-control lift, the young protagonist has an unusual communicative experience, we could even say a psychoanalytical horror.

Truly original the four minutes of WRAPPED, a production created by the six hands of Wittman, Kalin and paeper, of great visual value, a visual feast well put together.

Distruction, construction and aeriel views of Planet Earth and her marvels.

An English production but with Italian direction, THE CAUSE by Marco De Luca proposes again the theme of closed space, but this time in a bunker, where the free judge is pulverised and the human debate is made ruthlessly sincere.

The events unfold in the future, a mother and son of twenty-five years spied on with infrared cameras, until a big final twist.

The Polish director Marta Prus gives us POZEGNANIE, only three minutes of a prison visit between a man and woman, enough to sketch out a world of feelings, where maybe despite an imminent divorce, not everything has been lost.

The magic mirror spoke against the witch of Snow white and how it was right…. take into account the directing pair Bosnjak and Johnson for the film SIMULACRA, where real and imaginary play at canasta with the viewer.

We are faced with a short animation of the theme of doubling.

Surprising with its twists: pictures born in the mind of Marcel Becker-Neu in ITALIAN STANDOFF, a strange story of theft and dramatic twists…

Black humour, however, in the company of an elementary class in Cody Blue Snider’s short American film FOOL’S DAY, which shows what happens when a game gets out of hand. An, to say the least, explosive coffee is at the centre of the plot.

Also Miriam Bliese, a senstive director, discusses romantic relationships, on those interpersonal webs, so difficult to untie… in her AN DER TUR.

A short French film which greatly explores the psychological aspect of its characters.

MEANWHILE by Stephen McNally is an Anglo-Irish cartoon coproduction, in which the on point graphic workmanship creates a gentle affection for the characters.

Demanding, truly on a screenplay level, HATATZPITANIT recounts the creation of a fantasy parallel world from the eyes of a girl restricted to a livid wartime reality.

Directed by Noa Gusakov, this time again the audience’s attention was completely captured.

Truly beautiful and poetic, however, was the chain of events uniting the past and present of a woman, simply through the means of purchasing a broken vase. Created by Martin-Christopher Bode.

After this rich evening of film, there is nothing left to do but dream of a vase, but this time full of tamarind and ice. We’ll see you Wednesday evening, all the best!