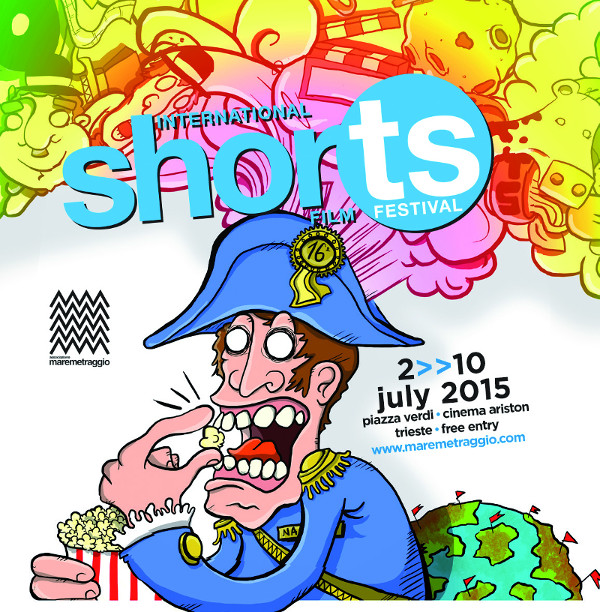 ShorTS International Film Festival in Trieste, starts tonight, Thursday 2nd July and continues until 10th of July. We begin at 8pm in Cinema Ariston with the Nuove Impronte section of debut works, and then at 9:30pm in Piazza Verdi we have the Maremetraggio section, 89 short films competing to win the 10,000 euro prize.

In the rich programme there is also: SweeTS4Kids, the section dedicated to children, with 27 short works to be shown in Museo Revoltella; film-oriented activites such as the Esterno/Giorno walks that let you visit Trieste through ‘places from films’ together with the film critic Nicola Falcinella; the annual event “Oltre il Muro”, that since 2009 has brought film to Trieste’s prison where they decide the best Italian short; at Teatro Verdi, there will be the meeting with the International Prize for Screenplay Mattador dedicated to Matteo Caenazzo, during which the jury members and this year’s finalists will be presented;  a special event for 2015, on the 12th July at 8:30pm, there will be a screening of “Femmine Folli” by Erich von Stroheim (1922) with a preview of the music composed by the Maestro Taralli; and furthermore, the Premio ShorTS Surf the Web in collaboration with Trieste’s Il Piccolo, which hosts seven short films on it’s website, waiting to be “recommended”.

The first feature film to be screened at Cinema Ariston will be “Senza nessuna pietà”, Michele Alhaique’s thriller with Pierfrancesco Favino, featured at Venice Festival in the Orizzonti section, “a film”, explains Beatrice Fiorentino director of the Nuove Impronte section, “that could be the sign of a redeparture for a new stage of independent Italian film”.

For the section dedicated to feature films, the Nuove Impronte jury will be made up of producer Francesca Cima, director Francesco Patierno and actor Barbora Bobulova, to whom the festival has also dedicated a tribute with the closing film “I nostri ragazzi” on the 10th July, together with the star of the Prospettiva, for emerging actors, Jacopo Olmo Antinori. Both will be in Trieste on the 9th July to meet with the public in the area of Teatro Verdi reserved for the festival.

The festival is carried out with the contribution of the Ministry for goods and cultural activities and tourism, the Friuli Venezia Giulia Region, Turismo Fvg, Trieste Council, Fondazione CRTrieste, Trieste Chamber of Commerce and Fondazione Casali.

The event profits from collaborations with Trieste Estate, the Province of Trieste, Casa del Cinema of Trieste, Cinema Ariston and Teatro Verdi of Trieste. Jaguar, Bakel and Trieste Caffè are the official partners of the 2015 festival.

The day by day programme
Scroll to top