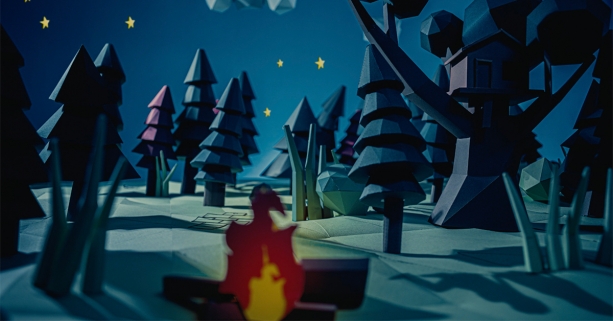 There was a time when Italian discos and nightclubs had exotic, alluring names – CAPRICCIO ROSA, NUOVO AMNESIA, BANDIERA GIALLA, just to mention the most celebrated.

These were places lit up by splendid strobe lights, where people in brightly coloured clothes enjoyed the pleasure of being together. It’s like talking about a prehistoric age now that we’re confined to the four walls of home and the few opportunities for meeting up are referred to as “gatherings”.

CASTLES by Stefano Bertelli is a compelling animation short on the actual meaning our lives. Hand in hand, a couple in shadow form pass through houses in trees. With glimpses of the sky, delicate installations of a lyrical, idealised world where we’d all like to live.

Breath-taking suspense in RED WINE by Santiago Menghini. At a charity event someone takes revenge by adding poison to a glass of wine, the film revealing the various movements of this glass.

SUCH A BEAUTIFUL TOWN by Marta Koch shows the surreal night-time route taken by an anguished young woman. Animated short which explores sexual and existential impulses. Note the producers, the same film school in Lodz, Poland, where Roman Polanski studied.

DEAF LOVE – VOLER ESSERE FELICI AD OGNI COSTO by Michele Bertini Malgarini has the tone of a comedy road film with touches of humour brought by the primitive southern Italian language, yet it also contains a universal message of love that goes beyond the barriers of deafness and disability in general.

THE VAN by Erenik Begiri carries us into a callous world, impervious to human feelings, where people are beaten senseless for money and where human contact crumbles under the weight of oppression.

Played rather than declaimed, DIALOGUE by Souvik Chakraborty is a psychedelic journey in India, highly reminiscent of videoclips from the 80s.

PAOLA MAKES A WISH by Zhannat Alshanova is a film recommended for men, the intriguing dialogue right up there with “Sex and the City”.

One of the things that enforced isolation hasn’t taken away from us is the amazing ability to move through the maelstrom of film images, assimilating them through our own personal vision.

Carry on with this. It’s the cheapest protection out there.

The date is for Wednesday evening.