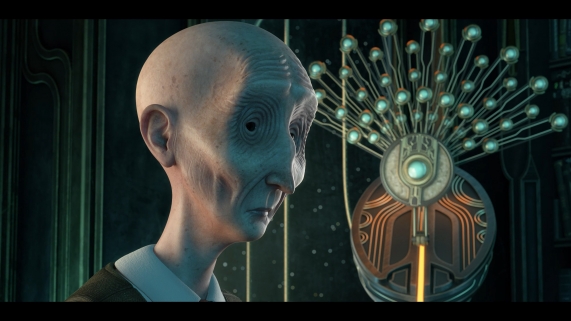 The scent of summer, of the sun and the sea, of dried salt on skin.

Public life bursts forth anew, after a spring sacrificed on the grim altar of fear, eyes desperately seeking emotion, that which pours out powerfully like a life force, goes against the flow and conquers all.

Our Festival continues its narrative through the Science & Society section, in collaboration with ESOF 2020, an invaluable opportunity for discussing our relationship with technology and its demands that rise and fall each day.

Almost all the shorts are animated, starting with AVARYA by Gokalp Gölen. An elderly, fragile human being faces up to a robot. The stakes are very high – a planet for living on.

Continuing with CLACK, by the duo Martinoni/Peretti, a fun yet knowingly dystopian satire on the risks of technology, on which we all depend.

Ever onwards with the women’s film project directed by Beatrice Aliné, ABSENCE OF LIGHT, an aesthetic and meditative reflection on the nature of light energy, the dark and its opposite.

This is followed by DEJEUNER SUR L’HERBE, by the Bourges/Charles/Harbonn ViaudpRougemont collective, picturing a comical scientist grappling with work and life problems.

Right from the first sequences HOME AWAY 3000, by the duo Pétel/Baranzini, makes us supportive of the likable lead cosmonaut character. Bald, moustachioed and agé and with a problem to solve.

FRAMES by Farhad Pakdel reminded us of a masterpiece of Italian science fiction from the 70s, Le Orme by Luigi Bazzoni (1975): the same atmosphere of a compressed capsule, a motionless temperature-controlled environment…

Like it or not, we are increasingly victims of a voyeuristic syndrome, as witnessed by STORY by Jola Bańkowska.

More than a resource, the element of water is a necessity, but what would happen if the public were not to notice that it’s missing? A small gem of eco science fiction entitled THE WATER, by Andrea Dargenio, tackles this problem.

From shorts to feature films with the Nuove Impronte section, to which we will return in greater detail later.

LOS FANTASMAS by Sebastián Lojo depicts life at the margins of society, male prostitution and a corrupt milieu, narrating all this in a grey, godforsaken setting.

Despite everything, we have managed to stay together even at a distance, laying down a metaphorical bridge from one bank to the other. Stay tuned for Monday evening.